TikTok: What does it mean for marketers?

TikTok. What is it? Is TikTok the next Vine?... What even happened to Vine? And most importantly, does your business need to be on TikTok? All of these questions addressed and more!

TikTok is a social media app that primarily consists of short 15-second video loops, largely used by the teenage demographic. TikTok is owned by the Chinese company, ByteDance, which during 2014 acquired and merged with Musical.ly, nearly doubling its user count. Between TikTok and its sister app Douyin, available in China only, there are over a billion downloads, and it continues to rise. TikTok is similar to Vine, in the sense that it’s comprised largely of comedic lip-sync videos, but there are a few differences. The first, and most distinct being; Vine is no longer around. Wait hold on, what’s Vine?

Vine was also a video-sharing app with 6-second video loops that swept the teen to tween generation by storm bringing in 200 million monthly users. Vine was originally created as an app to share casual video moments with friends (similar to what Snapchat has become), but the 6-second time constraint quickly turned into a creative challenge for users. Four months after it was founded, Twitter purchased Vine for $30 million in October 2012, intending for it to be a video companion to its short-form tweets. In the five years following the acquisition, Twitter attempted to monetize Vine’s large user-base but amidst upper management turnover within Vine, and not even being profitable itself, Twitter was forced to shut Vine down on January 17, 2017. Despite going under, in its short time, Vine bred a culture of video creativity and hilarious memes that no other social network has been able to replicate…until now.

With TikTok bearing so many similarities to Vine, it begs the question of whether it’s destined for the same fate. Despite not being profitable yet, TikTok brought in a reported $7 Billion in revenue for 2018, with rumors surfacing that it might soon go public. Furthermore, TikTok already has in-app purchases that surpass anything Vine had. Users can purchase coins starting at $0.99 for 100, which can be exchanged for virtual gifts. In October 2018 alone, TikTok brought in over $3.5 Million from these in-app transactions. Lastly and contrary to Vine, TikTok just launched its own ad model. While it is still in the testing phase and sure to undergo changes, it is a promising step in the right direction. The question now becomes, should your business get involved?

Does your business need to be on TikTok?

In short, if your target demographic is in their teens to early twenties, then you should definitely be considering TikTok. As of June 2018, TikTok had 500 million monthly users, and Douyin had 400 million. To put that into perspective, Facebook has 2.49 billion monthly users, Instagram has 1 billion, Snapchat has 186 million, and Twitter has 330 million. While TikTok doesn’t quite have the same following as Facebook, what it lacks in numbers, it makes up for in its precise demographic. To clarify, Facebook does have more than double TikTok’s users, however, those user’s ages span from 13 to over 65 years old, with over 50% being 35 and above. TikTok on the other hand, is for a specific age group of 16 to 24-year-olds. This group makes up 40% of its downloads with more female users than male. Only 13% of Facebook’s users fall in that age group and favor more male users than female. So if you’re looking to target the young Generation Z demographic, now is a good time to start marketing on TikTok. 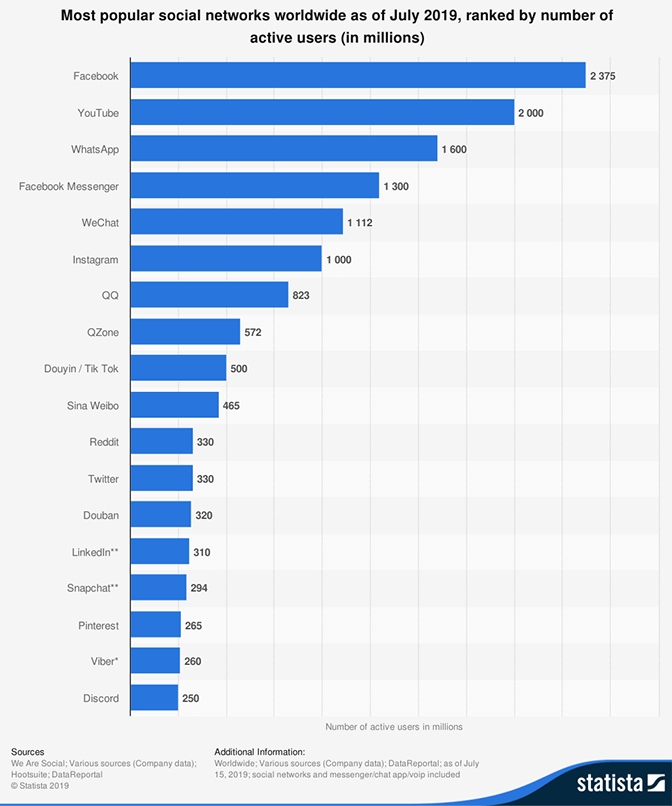 Now you might be thinking “we’ve tried other social media channels and had little success, this will just be more of the same”. The cool and unique thing about TikTok is that it doesn’t require you to follow anyone or any brand, it will simply start serving you trending content. Users can then like and share the videos they enjoy. So from a brand perspective, it might actually be easier to start and gain traction on TikTok than other social channels because you can simply replicate trending content with your own creative twist.

How to market on TikTok?

There are three ways to market on TikTok, influencer marketing, making your own original content, or Hashtag challenges. TikTok has hinted that marketers can expect ads in the near future, (perhaps Q4 of 2019?) but as of October 1st, 2019 they are only experimenting in certain areas.

If you’re looking to market to an audience on TikTok but don’t have the time or resources to build a following from scratch, then influencer marketing is the right way to go. Especially to a younger Gen Z market that is increasingly less receptive toward ads than those prior, influencer marketing can be quite successful. On average, TikTok influencers with 2.5 million followers or more, charge around $500 to $800 per post compared to the average of $100 for every 10,000 followers on Instagram. As with any influencer marketing, your brand’s product or service should align with the influencer's niche. Another frequent mistake to be wary of, as mentioned when working with YouTube influencers, is to not treat the influencer like a paid actor. The reason influencer marketing works on mediums like YouTube and TikTok is because it comes off as an authentic recommendation as opposed to a paid scripted ad. Thus there’s a degree of trust needed between brand and influencer to go this route. But if that’s too risky for your brand, that’s okay. There are other options.

To create a successful branded TikTok channel, all you need to do is create a couple of videos that go viral, then watch and wait as profits soar in. Sounds easy right? Growing a large following on TikTok can be both challenging and extremely time-consuming. Fortunately, creating and editing videos doesn’t need to be. TikTok allows users to upload videos from their devices making it easy to edit videos in a third-party tool (like WeVideo) and then upload when you’re done. While you might not go viral on your first try, creating a brand account isn’t a bad idea. Many brands will often create their own account while also partnering with an influencer to promote a hashtag challenge.

What are hashtag challenges on TikTok?

TikTok’s hashtag challenges are themed challenges with correlating hashtags (hence the name) often put on by an influencer or a brand. TikTok users are then encouraged to participate with their own variation of the challenge and will often end up going viral. Like Twitter or Instagram, users can search by the hashtag name and see all of the videos associated with the challenge. This can help create brand awareness and build a following on TikTok. An example of a challenge that went viral was the #HariboChallenge. What started off as gummy bears singing Adele’s “Someone Like You” evolved into an internet sensation with hundreds of variations. It’s worth noting that while brands are currently participating in these challenges, there is not a formal advertisement model on TikTok for it… Yet.

That said, this hasn’t stopped brands from participating and becoming extremely successful. Chipotle, for example, participated in the #HariboChallenge with their variation (left) which helped them gain traction before launching a challenge of their own, #GuacDance, to celebrate national avocado day (right). This TikTok video went on to go Viral sparking many creative renditions.

What can we expect with TikTok advertisements?

TikTok is still in the experimentation phase of deciding the types of ads to make available to brands, but thanks to a leaked slide deck obtained by Digiday, we have an idea of what those ad options could be. It’s worth noting that no pricing model has been released and the data used in the speculation on each of these ad types is from other similar social media platforms.

The brand takeover would likely consist of a full-screen ad occurring at the initial launch of the app with the option to be redirected to the brand’s website or TikTok profile.

This ad would probably be similar to the full-screen video ads that occur on YouTube in the middle of another video. It will be interesting to see whether users can skip the ads as well as the duration.

Brands are already experimenting with this type of method on TikTok. What we don’t know is whether a formal pricing model will be released for the Hashtag challenge or whether it remains simply as a marketing technique.

Snapchat already has their version of branded filters available to everyone as an example of what we could expect if TikTok follows suit. These often consist of a fun (and sometimes animated) filter that overlays the Snapchat picture of video. It will be cool to see if TikTok has 3D options or augmented reality available, and how much of the creation is done by TikTok or left to the brand to create.

TikTok, dubbed as the reincarnation of Vine, has certainly captured the attention of a younger generation of users and it has piqued the interest of many brands. However, given what transpired with Vine, it’s very understandable as to why marketers are hesitant to get involved this early. After observing the pricing model and ads released on TikTok, it’s only a matter of time before brands either rush to get involved or brush away TikTok as a mere fad and nothing more. That leaves the decision up to you. It’s hard to gauge whether getting started with TikTok now provides any benefit for the early adapter brands. However, given that creating an account is free, it could be worth the gamble.

Subscribe to have all TikTok-related articles delivered right to your inbox.