YouTube has over 1.3 billion users who watch 5 billion videos a day. That adds up to 3.25 billion hours of video watch-time a month. Plenty of video creators have already recognized the money-making potential with the platform and are cashing in on their videos.

YouTube generates anywhere from 16 to 25 billion dollars in annual revenue, largely from advertisements. With collective earnings that rival many Fortune 500 companies, many YouTubers have successfully walked the path to millionaire stardom. While there’s no guarantee you’ll end up a millionaire, putting your business on YouTube has plenty of benefits. Take a look at some of the most popular YouTube channels, followed by a guide on how you can start making money on YouTube.

Jump to a section 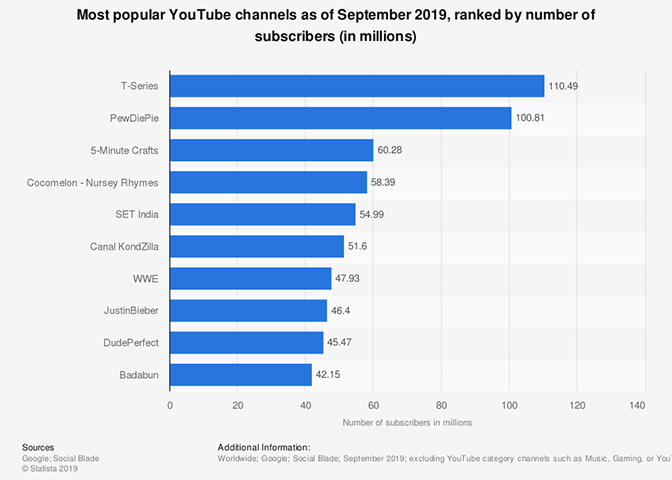 *all annual earnings are estimated projections of the highest possible annual revenue for that channel.

With over 111 million subscribers, T-Series is the most popular channel on YouTube, specializing in Indian Bollywood music videos. T-Series is an Indian record label and brings in an estimated 145 million USD in annual earnings.

Contrary to many of the other top subscribed channels, PewDiePie’s videos span across multiple different categories. From Minecraft gaming videos to unboxing videos to vlogging to horror video game commentary, PewDiePie proves that you don’t need to stick to just one niche. PewDiePie, also known as Felix Kjellberg, has 101 million subscribers and earns an estimated 26 million USD annually from YouTube.

This channel is dedicated to providing subscribers with DIY life hacks of all sorts, from survival training to kitchen organization. With 60 million subscribers, 5-Minute Crafts makes an estimated 20 million USD annually.

World Wrestling Entertainment, or WWE, is a scripted and choreographed entertainment channel on YouTube in the sports niche. WWE has over 80 million subscribers and earns an estimated 39 million USD annually.

Music pop star Justin Bieber has a YouTube channel dedicated to hosting his music videos. The channel has over 65 million subscribers and earns an estimated 138 million USD annually through YouTube ads and merchandise.

What started as five college basketball players performing trick shots in front of a camera, has turned into one of the top 10 most subscribed YouTube channels in the world. Dude Perfect has since expanded their content beyond trick shots, raising the stakes to extreme sports like helicopter battleships or large-scale Nerf gun wars. The channel has over 45 million followers and earns an estimated 13 million USD annually.

As the most subscribed Mexican YouTube channel, Badabun has over 40 million followers and makes an estimated 22 million USD in annual YouTube earnings. It features a wide range of content, from music videos to stories about bringing abandoned and abused animals back to good health.

Feeling inspired? Time to put a plan into place. Before you can start making money on YouTube, you need to have a channel with content that people will want to watch. YouTube is a massive ecosystem filled with different topics. In order to grow a following, you’ll need to narrow your scope by focusing on a specific topic. Below we’ve listed a few broad categories to help you get started.

Once you have a topic in mind, it’s helpful to look at other channels within that space and pinpoint what you can do to stand out from the competition. In other words, find your niche! The more specific the better, and as you grow and gain traction, you can broaden your scope. Gaming, for instance, is a very broad genre with a multitude of subgenres. (For more information on the gaming niche, check out Getting paid to play: 6 steps to becoming a YouTube gamer.)

Keep in mind there can be overlap between certain genres. For instance, the hugely successful YouTube channel, Epic Meal Time, is a cooking show of epic proportions (pun intended) but people also tune in for the humor. So don’t be afraid to be creative and bring your own unique twist to your channel. In addition to the content you share on your YouTube channel, you can further customize your channel page by designing a banner with online design tools like Venngage or Canva YouTube Banner. This can help tie all of your content together in one centralized theme.

Once you’ve found your niche and start producing quality content, your channel should start growing. Don’t be surprised if your channel doesn’t take off overnight. Like any business, building a following takes time. To make sure your channel is optimized for a YouTube search, check out this handy guide. Once you have a regular following, you can start exploring your YouTube money-making options.

Displaying YouTube ads on your video content is the earning method that comes to mind when most people think about making money on YouTube. Here’s how it works: As the host channel, you get paid when a viewer watches 30 seconds or more of the ad, or clicks the ad. On average, advertisers will pay $0.18 per view of the ad. By this math, for every thousand YouTube views, you’d make $18. However, Google (owner of YouTube), takes 45% of that revenue, leaving you with $9.90. By itself, this doesn’t seem like much, but when you take into account that some of the top-performing YouTube stars routinely get millions of views on multiple videos, the profit adds up.

In order to display ads on your YouTube channel, you need to join the YouTube Partner Program. To be eligible, your channel must have at least 4,000 hours of watch-time and have at least 1,000 channel subscribers within the last year. Once you’re eligible, you can join by following these steps:

Contrary to YouTube ads, affiliate marketing doesn’t require you to join the YouTube Partner Program or have a minimum threshold of subscribers or views (but obviously, you’ll need to have a community of viewers to make money). Affiliate marketing is when a brand pays you a commission on the sales generated from the traffic from your channel. This is usually tracked with a unique affiliate code or affiliate link. There are two ways to make money this way: 1) The brand pays you by the number of people who click your affiliate link or click-through rate (CTR) or 2) the brand gives you a direct percentage of the earnings from the products sold. The nice thing about affiliate marketing on YouTube is that it applies to practically every niche because so many companies have a program… including WeVideo!

A YouTube sponsorship is arguably the most difficult way to make money on YouTube, but also one of the most lucrative. You should have a sizeable following and influence in your niche before a company considers sponsoring you. The beauty of being sponsored on YouTube is that there’s no set structure like there is for YouTube ads. On the contrary, YouTubers and brands will create an agreement and decide the terms of reimbursement based on your niche and number of followers. Sites like Famebit are designed to help YouTubers match with appropriate brands looking to sponsor. The agreement might be an established payment in exchange for: a designated video promoting the brand, including a brand’s logo on your channel or exclusively using a brand’s product or service.

Tyler Blevins, better known by his gamer tag, “Ninja”, supposedly makes an estimated $500,000 a month through sponsorships with Red Bull and Microsoft. Ninja gained his popularity by streaming himself playing the popular battle royal video game, Fortnite, on YouTube and Twitch. The exact terms of agreement with his sponsors are unknown, but Blevins wears Red Bull apparel during his streams and uses a Microsoft PC for gaming, making the sponsorship very apparent.

It’s important to note that YouTube sponsorships can be somewhat risky for both parties involved. For the YouTuber, partnering with a big brand can put you at risk of losing authenticity or being viewed as a sell-out in the eyes of your followers. This can result in losing subscribers and views. Sponsorship can be risky for brands as well. For example, Disney had to pull their sponsorship of popular YouTube star, PewDiePie, for portraying offensive imagery in his YouTube videos. Brands can make the mistake of treating a YouTube influencer as a paid actor reciting set promotional lines rather than speaking on their own behalf. Therefore, it’s important to make sure both parties are aligned from the start.

Another way to make money on YouTube is directly from your subscribers’ donations. YouTubers who are enrolled in YouTube’s Partner Program can quickly sign up for YouTube Super Chat (otherwise you’ll have to enroll). This allows viewers to pay a small one-time donation to have their comment pinned and highlighted at the top of the comments feed for up to five hours, depending on the amount paid. Super Chat is great for the live YouTube streamer who has an active channel community. Here’s how to sign up for YouTube’s Super Chat:

Another form of YouTube fan funding is a site called Patreon. Patreon allows you to set up a gated channel for paid members only. The monthly fee is decided when setting up your account and can be a great way to offer exclusive content to loyal subscribers.

This last method is more about leveraging the YouTube channel to promote your business than making money passively. After your channel is sizeable enough to make money through some of the options listed above, it’s a great time to earn more income by promoting your own business or selling your own line of apparel. It’s worth noting that many of the top-grossing YouTube channels don’t make their money using just one method; they diversify and use a mix of methods to capitalize on their gains. Logan Paul, for instance, has YouTube ads on his videos, promotes affiliate companies and sponsorships, and also has his own line of merchandise called “Maverick”.

Like any investor, it’s wise to diversify your earning avenues. Just like making money on YouTube, getting started with video doesn’t have to be difficult. As video production and consumption continues to the growth of YouTube, there’s no better time than the present to get started creating awesome video content. Start with WeVideo today!

Enjoy the article? Subscribe below to have all YouTube-related articles delivered right to your inbox.

How to create a polaroid photo effect in WeVideo

10 ways to use video to market your product or service

3 reasons to make a Halloween video with your kids