Of every skill I struggled to learn in my 20 years in the classroom, the technique that took the longest to master was the last 2 weeks of school. The kids were done. By week thirty four, I was just trying to close down grades and do crowd control. All the projects and finals were wrapping up. Thirty four weeks of awesomeness - but the last two were always funky and anti-climactic.

Then, in 2008, I had an epiphany: take the Smart Start onboarding process we did with such success and grace at the beginning of each school year and flip it to happen at the END of the year. And in a flash, Fantastic Finish was a living, breathing idea.

What is Fantastic Finish?

An ideal Fantastic Finish plan is based on the Eduprotocols approach to the beginning-of-year Smart Start concept, with the Smart Start being a very intentional onboarding process for K-12 that mimics what happens at the most elite universities and corporations.

Smart Start’s goal is to minimize student stress by reducing cognitive load, maximizing class culture with daily mixer time (like you might have at a science camp) and teaching students both academic and non-academic procedures (logging in, using apps, etc.). In a classic Smart Start, the goal is to train students to learn 6-8 Eduprotocols in week one). It’s a free, amazing and powerful process.

Fantastic Finish has a primary goal of reducing student summer stress by having each class go up one grade level for 2-4 mornings during the second to last week of school. Whether your school is K-5, K-6 or K-8, all students move up one grade.

What happens during the Fantastic Finish morning sessions?

(anything like the Marshmallow Challenge and Things That Rock are excellent choices).

Teachers test out new Eduprotocols, or show kids their favorite go-to Eduprotocols with their new classes, keeping learning fresh and allowing them to gauge the skills of their incoming students.

Teachers do low-key assessments (Fast and Curious, 8p*ARTs, MathReps, Random Emoji Paragraphs are all ideal for this type of work). Imagine being able to have an academic handle on your incoming students before leaving for summer!?

Here are some end of year problems we solved with Fantastic Finish:

Instead of winding down the year, we wound up the year! New energy, new projects, new learning.

Instead of watching movies, kids presented to each other and created new projects.

Instead of having kids worried about their next teacher, we spent a couple of mornings getting to know our new classes and snuck in some low key assessments. Teachers had a better handle on the class coming in the fall.

Instead of a few more days with the same old kids, the whole school was abuzz with new classes, new teachers and new connections.

Instead of giving out end of the year coloring packets, we had kids reflect, explain and capstone their year with new teachers.

Instead of counting down the days and hours until the end, we enjoyed a new pace and the clock zipped right along.

How to boost your Fantastic Finish with WeVideo Classroom

Have students log in to Wevideo and make a five second video with just one word or phrase about something like a skill kids are good at or a favorite movie/character. By keeping the work so clear and so simple, kids can build and share in minutes.

Students simply use the WeVideo library and add a 3-4 second comment about their visuals. Then, let the sharing begin!

Thin Chef is a mash-up of two Eduprotocols, but the work is collaborative, so the student interaction is greatly increased.

In Thin Slides, each student creates a five second video with one video clip and one word or phrase. In an Iron Chef Lesson, an updated version of a classic jigsaw lesson, each student makes one slide with several facts and images as part of a collaborative team.

A Thin Chef lesson combines the quickness of Thin Slides with the collaboration of Iron Chef. In Thin Chef, each student adds three images and titles as part of a themed mini-project.

To emphasize collaboration, we set up groups of about four students to collaborate together. Each of the four students each get a singular subject around a theme and then they stitch all the video clips into a single mini-film. Each student adds a quick voice over to wrap up the project.

Developed in the late 1960s by Dorothy Frayer, this classic research-proven model of vocabulary development has had a huge revival within the Eduprotocols community.

Super agile and flexible, the Frayer works great in a slides-type setting, but with just a little imagination, the Frayer is also a powerful outline for short student academic films. Then, students can use WeVideo to bring these films to life.

Number Mania is an Eduprotocol that provides an excellent model for “hooking” students into content with almost no teacher preparation. In the classic model, students read an article and then submit interesting numbers and facts into an online form – which loads into a shared spreadsheet. It’s a powerful lesson plan that combines reading, writing, summarizing and creativity all in one. 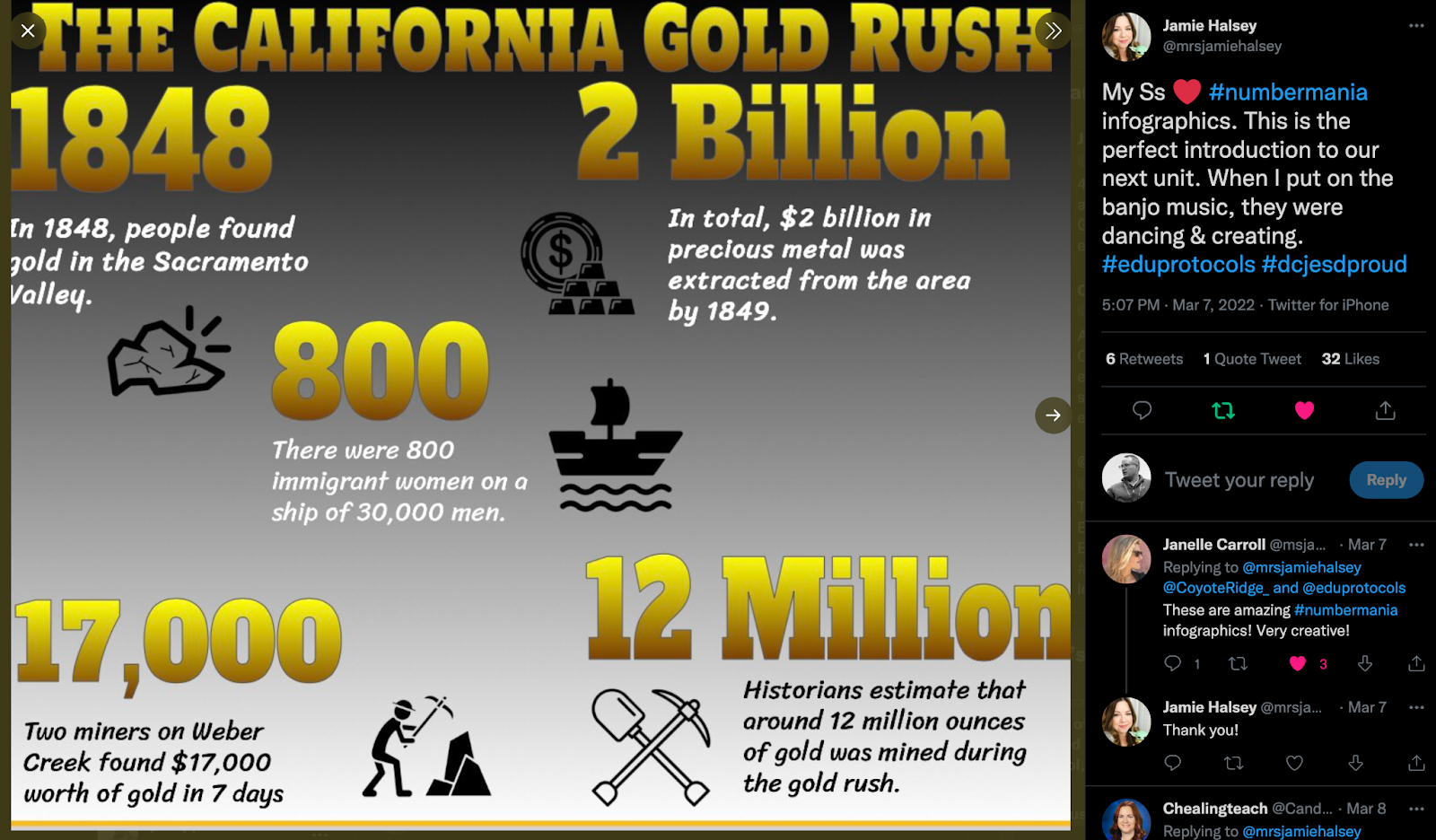 A key component to Eduprotocols is starting all the new lessons with a low cognitive load, so we always do the first Number Mania with facts about the students themselves.

Students use a Frayer to pre-plan 4-6 facts about themselves (three things they like, the age of all their siblings added up, times a day they say their current catch phrase, etc.). Then they can make a quick video or slideshow that includes a large number with a cool font (1, 2, 3, 4, 5, 6), a title for each, and an image.

Incorporating WeVideo versions of Eduprotocols is a great way to pre-start next year during Fantastic Finish. Plus, FF opens itself up to early communication between teachers and parents. This early connection always pays dividends in the new year.

Best of all – everything that a school plans (pro tip: plan the activities together to minimize workload) can be repeated, nearly verbatim in the first week of school to begin the new year. And year-to-year, school staff can simply improve/adjust the plan – the heavy lifting is done in that first round.

The first time we did a Fantastic Finish – before we even had a name for it – the 7th grade teacher that my 6th graders were going to visit came to me and said she liked the idea, but was really struggling with something. She said: “If I do my first week of school THIS year, what will I do NEXT year?”. She was worried about creating all new content for the Fall. I just smiled and said: “Have them do the same things in the fall, and they’ll just do it better!”. She winked at me and we were on our way.